My second audio play, Confessional deals with the relationship, factual and imagined, between Gilles de Rais, medieval serial murderer and France’s warrior-saint, Joan of Arc. They famously fought side by side against the English; their army broke the Siege of Orléans, which was a turning point in the struggle of the Dauphin of France to regain his territories. 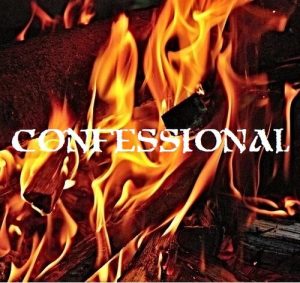 Joan of Arc is an intriguing figure: whether you consider her a saint or early feminist icon, a mystic or a schizophrenic, her life and actions had a profound impact on the outcome of the bitter struggle between the two nations. Burned as a witch in 1431, she was exonerated in 1456 by a tribunal appointed by the Pope, and eventually canonised in 1920.

Both Gilles and Joan played a significant role in the crowning of the Dauphin as Charles VII of France in 1429. Why did Gilles not attempt to rescue Joan from her accusers during her trial in Rouen? In ‘Confessional’, he is literally haunted by the question as his own trial reaches its inevitable conclusion.

In the ancient provinces of Anjou, Poitou and beyond, they told the tale of Bluebeard who was said to have murdered successive wives in a gruesome locked chamber of his castle. Tiffauges, once the home of Gilles de Rais, is known widely as Bluebeard’s castle. Just inside its gate are the remnants of a sinister double-walled keep, which appears to be defended from those inside the castle as well as from outside invaders. This keep, it is said, is testimony to Gilles de Rais’s actual crimes of child murder. These two names, then, are inextricably linked in local tradition, although it is very unclear how far back the connection goes.

French academic and historian, Emile Boutin, published more than twenty books on the history of this region before his death in 2013. Boutin was was brought up on the story of Bluebeard who, it was said, ‘devoured little children’. The historian recounts how, in times past, on the anniversary of Gilles de Rais’s death, the local children were soundly whipped to make sure that they never forgot this evil man.

For all my research, I could not find an explanation for why the name of Bluebeard should be so closely linked with that of Gilles de Rais, but one delightful answer was suggested to me by Maurice Chatry. I give him the final word:

“They say that Gilles rode a black horse of the breed called Barb or Berber. And that its mane glinted blue in the sunlight. And that the people — when the rumours ran rife that children were disappearing — the people would tell one another: ‘Beware of the Blue Barb’ (Barbe-Bleue).  Because when the Blue Barb was seen abroad, you knew that you must run to hide away your children.’

Listen to Confessional by Jill Korn at www.jillkorn.com/audio-drama