Collaboration – the inspiration of Edith Piaf

My fascination with the voice and persona of the French singer, Edith Piaf, goes back a very long way. I can remember as a child hearing her on the BBC Light Programme and being captivated even then by its plaintive, husky swoops and dips. I didn’t understand a word of French, but I knew that the song ‘Milord‘ carried a dramatic story at its heart. I came to realise much later that the almost-laugh in the singer’s delivery of the final verse, “Allez, venez, milord, vous avez l’air d’un môme…”, held both contempt and affection for the recipient of the song, whoever that might be. 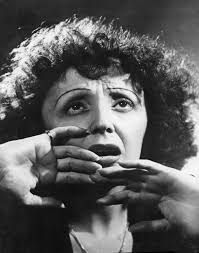 It took me a few years of learning French to be able to translate the lyrics of these beautiful songs. In those days, there was no YouTube – you had to work the words out for yourself. My mother got so tired of hearing ‘Hymne à L’Amour’ or ‘Mon Manège à Moi’ endlessly repeated on my cassette player that she longed to hear some heavy metal, Tamla Motown, reggae – anything! – instead. But I persevered, and so opened up for myself a whole canon of sung dramas, evoking the back streets and boulevards of Piaf’s beloved Paris; the passionate encounters by the Opéra, the Seine, Montmartre; the hopeful young lovers and despairing, abandoned women who people her musical world.

Eventually, I started to write my play, Collaboration. A great deal has been written about Edith Piaf, and my aim was to bring forward some of the lesser known aspects of her life. She is known for her many affairs with men, but she also attracted the loyalty of women friends who supported and worked with her throughout her career. She was accompanied for much of her life by Simone Berteaut who sometimes claimed to be her half-sister. And she was investigated, at the end of WW2, for collaboration with the forces of the Occupation. The ambiguities inherent in this last aspect of her story seemed to me to provide the basis for an intriguing play.

All of this was in the plan. What I hadn’t planned for, however, was that the strident, unapologetic voice of Simone Berteaut would impose itself more and more as the writing progressed, bringing her own take on the legend that Piaf created around herself. A series of short monologues came into being, in which the voice of Simone, malicious and affectionate, jealous and proud, tells us her side of the story.

Simone is largely ignored by biographers; in Edith Piaf’s own biography she is not mentioned at all. But in my play, she simply refused to take a minor role.

Listen to Collaboration by Jill Korn at www.jillkorn.com/audio-drama