Members of the Scottish Writers’ Centre will be sharing their thoughts on writing, some of their work and occasional musings  in our new Members’ Website Posts feature. First up is the popular and well-regarded poet A C Clarke. 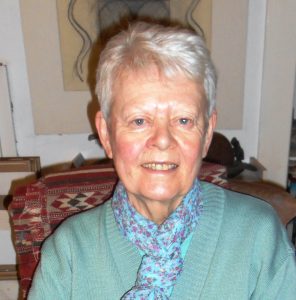 A C Clarke has been living in Scotland since 2002.  She is widely published in magazines and anthologies. Her first published book was a pamphlet, The Gallery on the Left, Akros Press, 2003; her first full collection was Breathing Each Other In (a result of winning a competition for poetry collections by the over-60s), Blinking Eye Press, 2005; these were followed by Messages of Change, Oversteps Press 2008, A Natural Curiosity New Voices Press 2011 (shortlisted for the Callum Macdonald Poetry Pamphlet Award), Fr Meslier’s Confession, Oversteps Press 2012, In The Margin, Cinnamon Press 2015,  Owersettin, a collaborative pamphlet with Sheila Templeton and Maggie Rabatski,  Tapsalteerie Press 2016,  A Troubling Woman, Oversteps Press 2017,  War Baby,  Cinnamon Press 2018 (one of the four joint winners of the 2017 Cinnamon Poetry Pamphlet Competition), Drochaid a second collaborative pamphlet with Sheila Templeton and Maggie Rabatski, Tapsalteerie Press 2019.

She is currently collaborating again with Sheila Templeton and Maggie Rabatski on a third project of themed poems in the three languages of Scotland, and working on a series of poems  centred on Gala Dali, formerly Gala Éluard (aka Elena Dimitrievna Diakonova), and the Surrealists. The first series of these poems (working title Wedding Grief) is due to be published by Tapsalteerie Press next year.

You will hear more from A C Clarke over the next fortnight. Read more about her writing interests here. Below is a beautiful example of her poetry.

The maps were the gift of the place  Roger Harvey

Inside the stiffbound books, their spines still unbroken,

the once bright paper has mellowed to ochre,

the inks which shaded boundaries between

in a sepia concordat. Europe resembles

a child’s drawing of Europe. Eastward

a sea baited with mermaids. A bookworm

has eaten the Azores. Top left at the extreme

edge a space where the cartographer

prompting some mariner in a quiet harbour

to rig his carack, lay in stores – or so imagines

the reader seated by his study fire

with a full glass, dreaming snowflakes

through darkness that never lifts. The thought stirs him

to poke the coals into a blaze. That moment

knows the contradiction of the map

which flattens fierce and living landscape

into the four corners of a page

down which his finger travels glibly pointing.