At the end of the year we’re drawn into reflecting on the past twelve months, and how far we’ve come this year.  We know it wouldn’t be possible without the fabulously supportive literary scene in Glasgow, so without further ado, let’s hear it for our top 10 literary ventures in the city!

Celebrating its first decade this year was no small milestone for Glasgow’s book festival which is held in the Mitchell Library.  Over the years since its inception the festival has hosted Edwin Morgan, Iain Banks, Louise Welsh, Sandi Toksvig, Mark Z Danielewski, and many more.  This year the festival has expanded into a year round calendar of events, although nothing beats the buzz around the Mitchell in the spring when the festival hosts around two weeks jam-packed with everything from children’s workshops to open-mic events.  We’ll also be appearing to host one of our famous Speakeasys next year, so keep your eyes peeled for the details!

Founded and currently run by Ellen McAteer, tell it slant is a poetry bookshop within the Project Cafe on Renfrew Street.  tell it slant holds regular poetry launches and readings, and aims to reach out to social welfare organisations and provide an avenue to develop Scotland’s poetic talent.  They also host seasonal poets-in-residence, a position currently held by Liz Bassett, who is mentored by a founding member of the SWC, Gerry Loose.  The shop stocks pamphlets, rare, out-of-print and second-hand poetry in addition to the work of new and emerging poets.

Our own Ruby McCann is a huge fan of Seeds of Thought, a non-funded art and poetry collective that has been running since 2006.  They hold regular events in the CCA including a writer’s group and spoken word nights that regularly raise the roof.  Founded as ‘something fun to do in our spare time’ they have been going strong for nearly a decade, offering a platform for the bright and bold of Glasgow’s literary scene with a welcoming atmosphere and a talent for bringing creative people together. 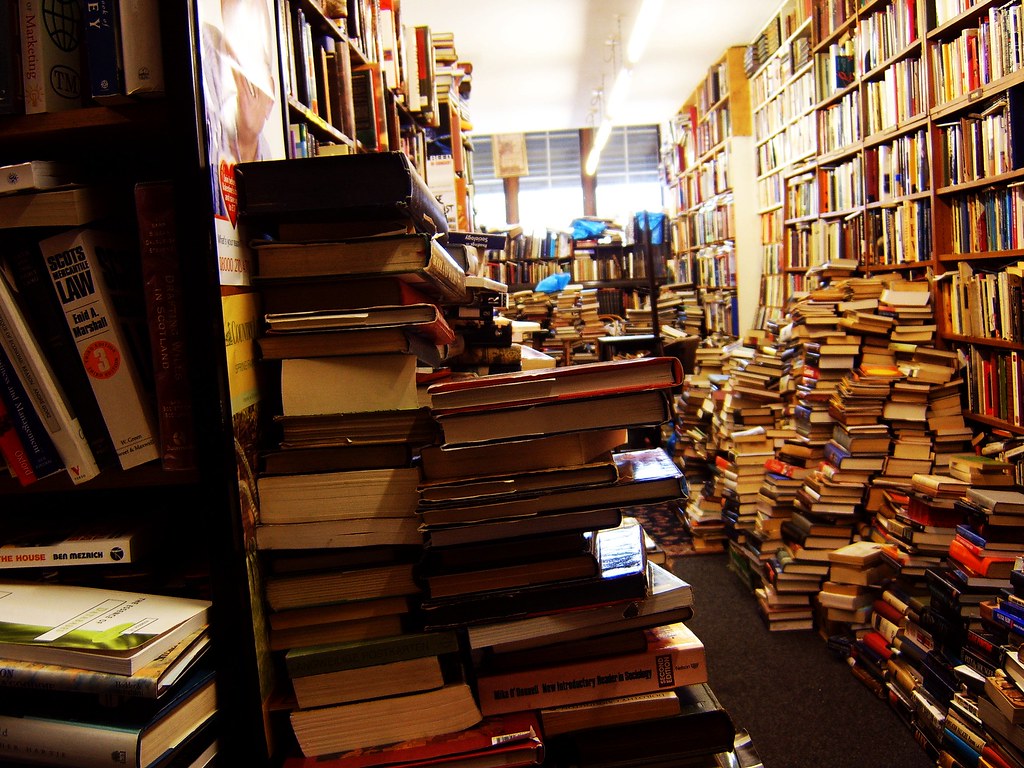 Probably the best known of the bookshops collectively nicknamed ‘The Three Bears’ in Glasgow’s West End, Voltaire & Rousseau is a higgedly-piggeldy treasure trove of second-hand books.  There’s almost nothing they don’t have, but you have to be prepared for the task of finding it.  All the best bookshops have a resident animal and V&R is no exception – there is often a cat snoozing amid the towering piles of science fiction. Snuggled along Otago Lane with its famous porch of £1 books, you’d best set aside a whole afternoon for browsing.

Operating mostly out of the Old Hairdresser’s opposite Stereo, you never know just quite what you’ll get from these eclectic zine-peddlers.  Founded in 2013 ‘out of boredom’ and in response to bookfairs that ‘felt flat’ their own output has been anything but boring.  With a focus on speculative fiction in all its forms they have hosted everyone from cyberpunk poets to previous SWC chair and surrealist aficionado Douglas Thompson.  They are also currently working on publishing their first anthology of previously unpublished submissions.

In operation since 1991, the GWL is the grand matriarch of Glasgow’s literary scene.  Providing an open, inclusive venue for women like no venue in the UK the GWL has gone from strength to strength.  They recently launched the refurbishment of their base in the old Bridgeton Library, turning it into a permanent, purpose-built home for the organisation.  From reading groups to Women’s Heritage Walks and a series of events on sexology there is no end to their remit to empower and educate and we can’t wait to see what they do next!

Offering a unique opportunity to get to know the faces behind the emails and tweets that fly back and forth around the blogosphere Weegie Wednesday is a monthly networking meetup for writers of all backgrounds.  Whether it’s comic book writing, journalism, or drama, or anything else for that matter, these events are a space for Scottish writers to get together socially.  Weegie Wednesdays also offer a chance to network beyond your writing comfort zone, and to build relationships with other writers.  They are based out of the CCA, and generally hold their meetings on Fridays (we’re kidding).

We’d have included them even if we didn’t share an office with them, honestly.  Celebrating five years of showcasing the finest in homegrown and worldwide comic book talent this year, they pride themselves on offering a con that keeps the creators of comic books at its core.  They make an effort to highlight break out talent and their grassroots ethos offers a con experience like no other. Next year they will expand to a second venue in the Royal Concert Hall for the con part of the festivities, with the festival hub remaining at the CCA.

There aren’t many cities that can boast both a poetry bookshop and an independent radical bookshop but Glasgow certainly has the literary gumption for both.  Calton Books is located above Glasgow Green and operates ‘revolutionary’ opening hours (that’s 11.30-4.30 Wednesday to Sunday).  While you might not agree with everything they stock, you can guarantee that something will spark definitely spark a conversation.  Calton Books’ success in Glasgow proves that writing should always challenge us to question, to analyse, to strive to make things better.

Whatever night of the week it is, you’ll likely find a spoken word event on the go somewhere in Glasgow.  From long runners like Last Monday at Rio to recent Edinburgh imports Rally & Broad there’s no stopping the outpouring of talent in bars, libraries, galleries and clubs across the city.  Fierce debate arose when we tried to pick just one, with everywhere from Inn Deep, the Poetry Club, and Aloud at the QMU getting a look in.  To save coming to blows, we decided to simply highlight how brilliant it is that Glasgow plays host to so much literary talent on a regular basis.

Speaking of literary talent, we would be remiss if we didn’t mention our own unique Speakeasys.  Although we thought it would be a bit cheeky to put ourselves in the top ten, we feel that our mix of spoken word and music deserves a shout out, as do all those talented members and speakers who have performed for us over the years.  We wouldn’t be the Scottish Writers’ Centre without you!