On the fourth day of Christmas, the SWC gave to me…

…Four authors who illustrate their own books

Continuing our SWC Christmas recommendations, we’ve put together a list of writers who also illustrate their work. Whether it’s fiction, fantasy, poetry or children’s literature you’re after, we’ve got you covered. After all, who doesn’t love books with pictures in them?

Perhaps the most obvious entry on this list, Alasdair Gray is an artist first and foremost. Gray’s illustrations complement his literature: the sweeping panoramas which split the four chapters of Lanark are stark evocations of covers and frontispieces from classical texts, such as The Divine Comedy or Leviathan. His writing and his art are intertwined, completing each other beyond just visual representation. They often blur the line between literature and its inspiration: Gray’s illustrations in his 1992 novel Poor Things are deliberately miscredited to the Scottish artist William Strang, while the many portraits in the novel are based on Gray’s friends. As he stated in an interview, ‘I like having faces of friends in my books’. 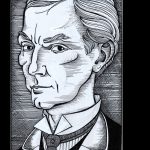 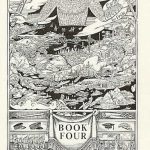 The most famous cover for Tolkien’s The Hobbit, which depicts Bilbo’s shrouded silhouette picking his way around a smug, dozing Smaug, was illustrated by Tolkien himself. Though his works are most often accompanied by the stunning artwork of long-time Middle Earth illustrators Alan Lee and John Howe, Tolkien was no stranger to drawing the worlds he created. The iconic Eye of Sauron, encircled by the One Ring’s inscription, now appears on the cover of many editions of The Lord of the Rings. The Harper Collins reset edition of The Hobbit features a dust jacket of Tolkien’s original design. It contains this description:

The cover of this edition of The Hobbit reproduces Tolkien’s own dust jacket design for the first edition…The wraparound painting was designed around the long road (on the spine) through the forest to the Lonely Mountain. On the back are night, darkness, and the evil dragon, in contrast to day, light, and the good eagles seen on the front.

Louisa Anne Meredith published many diaries and poems chronicling her life in Australia, many of which were accompanied by her own artwork. The etchings and paintings which illustrate her short verse and descriptions are stunning, depicting the flora and fauna among which she lived with her family in Tasmania in the nineteenth century. The most autobiographical writer and artist on this list, Meredith’s works act as literature, art book and travel companion rolled into one. The plate featured below appears in her book The Romance of Nature, or The Flower Seasons Illustrated.

A writer for children and younger readers, Grace Lin writes books based on the stories she heard in her own childhood. Lin’s writing mixes elements of her Taiwanese heritage with her own experiences growing up Asian-American. The fable-like form of many of her stories help to universalise her themes, as she often focuses on the ways in which stories are retold with new influences. Her books, such as When the Sea Turned to Silver and Where the Mountain Meets the Moon also feature her illustrations, themselves a mixture of traditional flat, panel-based Asian painting and Van Gogh-esque patterns and intricate swirls.