‘The heart that beats within me is not the one I was born with’ is the poignant opening line to Angela Hughes’ poetry film ‘The Heart That Beats (is Not Mine)’. Hughes’ poem about receiving a heart that is not your own is a perfect elucidation of the nature of poetry film as a medium, a genre which investigates the problems of a split self. What happens when we split the voice from the body? The writers featured in the Scottish Writers’ Centre’s most recent event, ‘Fierce Poetry in Motion’ see this challenge as an ideal chance for writers to explore new creative possibilities.

The evening kicks off with Lesley Traynor’s collaborative film ‘Thrawn’, filmed by Paul Docherty as part of a 48-hour-film challenge. When creating the film, Traynor reached out to women via social media and asked them to send a video recording of themselves performing her poetry. Featuring film clips from women as far away as Canada, these ‘Women with Fierce Words’ demonstrate the power of poetry films to cross spacial boundaries and transform the traditionally monolithic voice of the author into a rich mix of female voices. The result is an empowering message of mutual female support.

Next is Katharine Macfarlane’s visually stunning work ‘St Enoch’ (filmed by Fiona McNeill) which brings us back to Scottish soil. Macfarlane’s poem not only grounds her memories and identity in the Scottish landscape, but also explores the duplicitous nature of the self and the part of her self that ‘still lies rent in two… bringing forth life that becomes another you.’ In this film, superimposed clips of St Enoch’s Station, the subway, and various bridges and rivers act as a visual reflection of the interwoven thread of events and memories which make up the fabric of our identity. 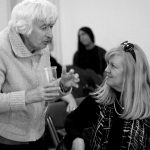 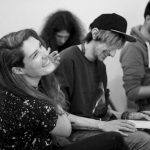 The two animated poetry films, the first by award-winning illustrator Max Scratchmann and the latter by poet Stephen Watt truly demonstrate how technology has changed the rules of the game for poetry. The dream-like atmosphere of Scratchmann’s ‘Corridors of Dreams’ is expertly displayed through the use of animation. The faceless figure of a man walking down a seemingly never-ending corridor is paired with the cadenced echo of uncanny footsteps which reverberate around the room in a beautifully haunting way. As an aesthetic contrast to Scratchmann’s work, Watt’s ‘Slow Dancing in the Kitchen’ works perfectly. Black and white illustrations create a minimalist aesthetic which reflects the poem’s concern with the small and simple things that make us love someone.

Carla Woodburn’s ‘Armageddon’ is a punchy and dynamic poem about global warming. Accompanying the words is Grant Canyon’s guitar and bass, and Calum Govan’s organ which gives the poem a ‘punk poetry’ vibe reminiscent of Patti Smith. The poem, just like its title, is full of a compelling destructive force. Donal McLaughlin’s ‘[new trees!] haiku’, beautifully complements Woodburn’s poem by bringing the focus back to nature’s beauty. The film is a simple clip of a fruit tree covered in snow, and these pure and natural elements of the one-breath poem restore a mindful ambiance to the room.

Next, Janet Crawford’s ‘Beacon’ and Savannah Dodd’s ‘Glasses’ deal with difficult subjects but serve as a reminder of the educational value of recording poetry, a mechanism that then allows poems to be circulated to a wider audience. Crawford’s poem, at once a message to her sons and a response to teenage suicide, embraces a message of love in the face of adversity. Similarly, Dodd’s poem is concerned with rape and society’s problematic propensity to victim-blame. Here, the camera is invaluable in transmitting her painful memories to the audience, through an invasive but empowering close-up of Dodd’s glasses.

Finally, Sabina England’s stunning poetry film ‘Deaf Brown Gurl’ is the longest piece of the evening. The vibrant visuality of the film draws us into Sabina’s world of visual communication by bringing our attention to the image or the sign. This extraordinary piece of work feels like an extension of Sabina’s soul: powerful and poignant, her presence is inescapable. The film captures and eternalises the marginalised voice, in the process showing how poetry film can be used as a progressive and political tool of empowerment.