In a Cloud of Seabirds: The Art of Collaborating with Douglas Robertson

For artist Douglas Robertson, working alongside other creatives is a ‘gift’. Through his career spanning over twenty years, Robertson has worked on projects that fuse words and images to communicate an inspired dialogue between writer and artist. With a long list of collaborators including Donald S. Murray, Gordon Meade, Isobel Dixon, Jen Hadfield, Valerie Gillies, Ian Stephen and Kevin MacNeil, it is clear to see that for Robertson, these creative alliances are gifts that keep on giving.

The key advice Robertson gives for a successful collaborative venture is to ‘work beside someone you get along with well’. One of these friendly artistic partnerships is demonstrated with Robertson’s collaborations with Donald S. Murray, with whom he has provided drawings for Small Expectations, The Guga Stone; lies, legends and lunacies of St Kilda and the soon-to-be-released Shorelines. For Robertson’s appearance in the CCA Club Room, he previewed the upcoming artwork for Murray’s Shorelines, explaining how he imprinted a narrative journey and mythology into his drawings and provided visual balance and movement to the textual content of the collection.

‘Study for Wren’ – from Shorelines (with Donald S. Murray)

However, on the evening, it was not only the collaboration between illustrator and writer that Robertson discussed with the Scottish Writers’ Centre; but also the dialogue between artist and audience. For this part of the discussion, Robertson examined his work on the ‘poem boats’, his collaboration with Valerie Gillies, Ian Stephen and Kevin MacNeil. These ‘poem boats’ are small, hand carved wooden vessels sculpted from wood by Robertson with the addition of inscribed verses that were written by his poet collaborators. After their exhibition at Kelvingrove Art Gallery & Museum, the boats were launched from places at the same latitude as St Kilda (58° 50′ N), where they were then left to the mercy of the tide. To the fortunate beachcomber who finds and cherishes the boat’s craft, it becomes a gift from artist to audience. 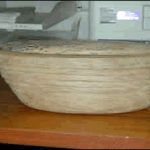 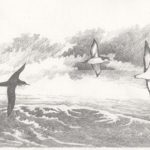 Furthermore, in the creation of the boats, Robertson described how he literally ‘built’ poetry and artistry into his carvings. However, the boats can be viewed as a symbolic epitomisation of the artistic process: as the boats were launched into the abyss of the ocean, its artistry was released into the unknown where the creators of the ‘poem boats’ had no guarantee of ‘return’, or acknowledgement of its place in the hearts and minds of its audience.

Ultimately, through Robertson’s talk, he communicates that the act of collaboration is to amplify the art of creation; through the act, the gift never leaves the giver as it becomes manifest in the art itself.

Find more of Douglas’ exquisite artwork and keep up to date with his most recent collaborations here.